Tequila is a distilled spirit produced in a small region of Mexico. It is produced from distillation of fermented mask obtained from the heart or a plant known as “Agave Azul” or blue agave. This heart, similar to a giant pineapple, it is also known as “mezcal”. In nahuatl means “House of the Moon” and is used to signify the marrow, essence, center, etc. Tequila is a product of the meeting of two worlds. It uses a technique originated in the European continent to transform a raw material, which has been cultivated since ancient times and typical of the American land. Over 200 types of agaves can be found in Mexico. And similar alcoholic beverages are produced from those agaves in diverse places. Those are given the generic name of mezcal and take their name from the town in where they are made. That is why we have mezcal of Oaxaca, Cotija, Quitupan, Tonaya, Tuxcacuesco, Apulco, and so on. But undoubtedly, the most famous mezcal is from Tequila, which name comes from an ancient and dynamic town located about 50 kilometers north of Guadalajara, on the way of this city and to other well-known place, the port of San Blas de Nayarit, at the Pacific Coast of Mexico. During colonial times, blue agave thrived in the lands surrounding the county of Tequila. Many large and small factories sprang up to produce the prestigious liquor, known earlier simply as “the wine of Tequila Mezcal”. 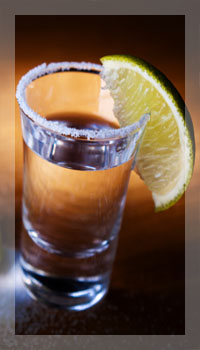 Nowadays, for many reasons Tequila is considered the “Mexican by excellence” beverage, and with the mariachis and charros of Jalisco, exemplifies abroad the archetype of the Mexican music and way of living of Mexican people.

In fact, a mariachi musician dressed in the traditional ensemble, traje de charro, would not be considered drinking anything else but Tequila.

It was probably in the middle of the 16th century when some desperate Spaniard began to make mescal in the area of Tequila. Blue agave grew abundantly in the county and had tremendous value in the course of daily life. The leaves of the plant were used to build roofs; make needles, punches, pins and nails; wind strong rope; manufacture paper and even a certain type of container. Besides using the dried fleshy leaves as fuel, their ashes were used as soap, bleach or detergent and their sap was used to heal wounds.

In fact, the least used part of the plant was the heart. It is likely that the Spaniards noticed that the native peoples chewed the heart as a sweet and thus recognized the heart’s high sugar content. Thirsty for a libation, they may then have thought to distill it. But this discovery was no exactly cheered by the authorities.

Due in greater part to instructions to promote the import of Spanish wines and liquors than to a marked desire to be abstemious, the colonial government prohibited the making of local products which might compete with Spanish alcoholic beverages. Tequila therefore had to be made in secret in the beginning. Due to the volume of Tequila production reached and the government’s urgent need for funds, Tequila production was legalized in the 17th century on the payment of a corresponding tax.

Thanks to Tequila, the Treasury could undertake the first important works towards the introduction of drinking water to the city of Guadalajara and, years later, could start construction of the palace which is still used by the Jalisco government up to date..

As Tequila production originated along the road to San Blas, this town became an important port at the middle of the 18th century since the new Spanish colonies in northwest Mexico were supplied from there and the “mescal wine of this land” became the first export product produced from what is today the State of Jalisco.

The mezcal of Tequila helped the Spaniards to endure the loneliness of those northern lands. The Jesuits and Franciscans, who in succession colonized the Indian population for the purpose of imparting Christianity, often felt happier and abided with greater resignation and patience the hoped for arrival of eternal peace and their subjection to a manner of living so different from that they were accustomed. 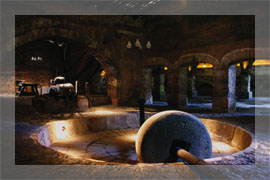 In the same way, Tequila serviced the dusty throats of those who worked in the not too distant but still remote mines of Bolanos, which were so prosperous at the end of the 18th century.

With Mexican independence in 1821, Spanish liquors started to face with greater difficulties reaching Mexico. This was the opening for Tequila producers to increase their sales in Guadalajara and to start marketing Tequila in Mexico City and the entire centre of the country.

During the first half of the 19th century some mills had acquired a certain importance and the producers were starting to exert notable political influence.

At this time, thanks to the easy access to the port of San Blas, it was again possible for Tequila sales to increase, this time due to gold-seekers and miners. In 1849 gold was found in current day California without considering that, just one year earlier, the land had been wrenched from Mexico by the Yankees.

As Mexico endured its civil war in 1857, the war which would end the old social order inherited under Spanish domination, Tequila producers already knew what their industry needed. They continued to support the liberal cause until it triumphed in 1867. It was a distinguished Tequila producer who then assumed the governorship of the State of Jalisco following the defeat of the French whom Napoleon III had sent in support of the conservatives.

Tequila’s main enemy at the end of the 19th and beginning of the 20th century was the railroad in the USA which easily transported European liquors from coast to coast. This problem was exacerbated by Mexican high society which retained a preference for French products.

Only among the masses did one find regular consumers of the traditional distilled drink but, even so, Tequila consumption grew considerably.It was the Mexican Revolution that foretold a new attitude that resounded in favor of Tequila. 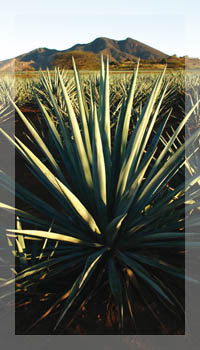 With the overthrow in 1911 of the lengthy dictatorship headed by General Porfirio Diaz, the conflict became a thing of the past and the whole country looked for ways to strengthen the sense of Mexican nationhood.

Drinking Tequila instead of imported distilled liquors was one of these gestures. What’s more, even the government consciously favored the image of Tequila, almost as a national symbol.

As well, in the 30s and 40s, the successful Mexican film industry contributed beyond measure to Tequila’s popularity by creating a misleading stereotype of what it meant to be Mexican.

In addition to movies, many songs then in vogue had much to do with the growing fame of the drink. It also helped that a popular saying named Tequila as the best medicine against an epidemic of Spanish influenza which scourged northern Mexico in 1930. In order to meet the demand, Tequila was provided in small bottles fabricated in the industrial city of Monterrey, rather than being distributed in bulk in cumbersome barrels.

Likewise, the oil boom that arose at that time off the Gulf Coast of Mexico boosted the consumption of Tequila thanks to handy half-litre bottles which were easy to handle and transport - even in the back pocket of the loose-fitting trousers which were the style then and so commonly seen on cinema screens.

In 1940 the Tequila industry was ready to supplant whisky which had ceased to reach the USA due to WWII. Tequila exports reached unexpected levels.

The drop in sales was similarly steep when the armistice unexpectedly arrived and the industry had to make a concerted effort to increase its domestic market and look for sales in Europe and South America.

From 1950 the Tequila production chain initiated considerable technical improvements. Many factories, without detriment to quality, attained high yields and levels of hygiene. Some brands proved more accessible to the common palate due to their lower alcohol content.

It was found that the optimal region to grow blue agave could be expanded, without harm to the product, which allowed the increasing demand to be duly satisfied.

It is regrettable that Tequila is being falsified in many countries without any apparent concern on the part of these foreign governments, and in spite of the spirit of international accords and agreements, notably the Lisbon Agreement, which state that Tequila can only be produced legitimately in a specific region of Mexico.

Today the blue agave fields, with their so characteristic appearance, occupy a great central strip of Jalisco’s landscape. The industry, directly or indirectly, involves some 300,000 people, all of them proud to participate in the making of a product so deeply ingrained in the life of Western Mexico, and pleased to offer this absolutely Mexican drink to the rest of the world.